Findings from our tests

What did that mean for the customer?

Having both extremely high levels of aluminium and silicone are signs of dirt ingress. Dirt within the final drive has the potential to wear the part at an extremely fast rate given the amounts detected from our tests. This was confirmed when Komatsu detected unusually high amounts of iron, copper and chrome, which suggested that the final drive itself was in fact already deteriorating. This classified the issue as critical, meaning a final drive inspection/replacement was required immediately.

Ability to identify specific wear rates, thanks to previous test from Komatsu CMS

As the customer has undertaken oil samples for testing with Komatsu CMS on a regular basis, we were able to identify the specific wear rate, allowing us to inform the customer immediately to take action. The previous sample detected cautious amounts of aluminium and silicone which required the customer to monitor the final drive although the machine could continue operating. 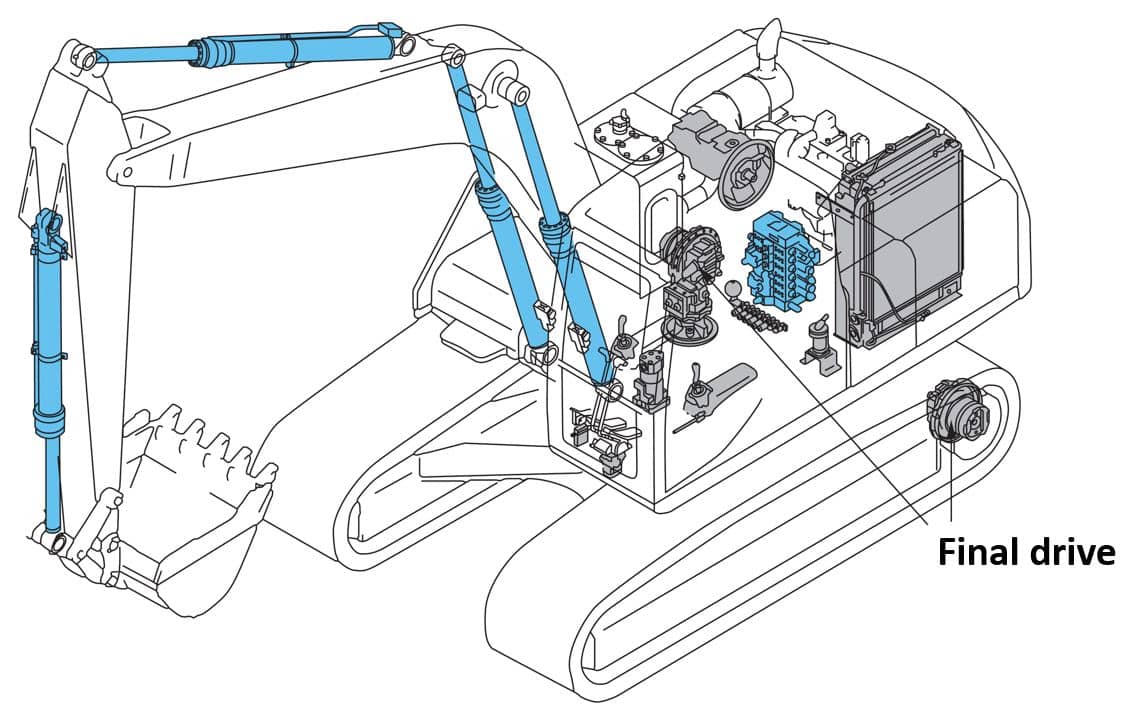 As part of the customer’s monitoring of the final drive, it was decided to take the sample again within the next 250 hours which led to the current findings. Our analysis in comparing trends from the previous and current reports gave Komatsu CMS the confidence to calculate wear rates and to provide expert recommendation. The decision for the customer to regularly sample with Komatsu allowed us to evaluate the machine’s components historical test data, identify any anomalies and make assessments.

OUTCOME FOR THE CUSTOMER

The below steps were taken to ensure swift action to avoid catastrophic failure which exposed the risk of lengthy downtown.

Communication with the customer’s service supervisor

Once Komatsu laboratory analyst/technician (role?) completed the sample report and emailed it to the customer, a phone call was made directly to the customer’s maintenance manager to advise of the critical findings to make them aware of the critical status of the final drive and the potential imminent failure that could lead to costly downtown if left unaddressed. The maintenance manager addressed the issue by stopping the PC200 from operating and had the machine taken into the service workshop.

During the call with the customer, the Komatsu laboratory technician’s proposed solution was to immediately replace the component with a Komatsu genuine final drive. This was to guarantee the ease of fitment and peace of mind that the part would be covered under Komatsu’s parts warranty.

One of the options proposed by Komatsu was for the customer to replace the final drive themselves. However, as all their fitters were busy on other tasks, Komatsu’s second option of have a Komatsu service technician on site was the best option.

The Komatsu service technician travelled directly to the customer’s site where the PC200 was ready to be worked on. Upon doing the final drive replacement it was found that the duo cone seal had failed, which allowed dirt to enter the final drive and cause the component to wear at unusually high rates.

Search by part number of keyword
Popular Searches
Adaptor
Bolt
PIN
Shoe
Your Recent Searches
Did you mean
PRODUCTS
BRANDS
CATEGORY
Cookies are small text files created by a web browser when a user visits a website. Cookies are stored on your device. Some cookies are only stored for the duration of your site visit whilst others are stored for longer periods of time. The information stored in a cookie is transferred between a website and the browser to provide enhanced functionality and improve the user experience when using the website. Komatsu may collect certain information such as browser type and operating system through the use of cookies to improve your experience. You acknowledge this by using our website.